In London, the weather shaman treated us to a particularly mild spell in the lead up to Christmas, that left myself and other city dwellers stripping off their coats.
This warm spell made an impact on my winter makes; my usual hibernation knitting was usurped and my standard two pairs of tights and thermal vest were packed up not knowing whether they’d need to make any appearance at all.
The mild weather made me realise I was lacking the type of dress you can easily throw on with tights and boots and not have to worry too much. To fill the gap I thought it was time I finally made a By Hand London Zeena dress, I have said I was planning to make one for ages, so about time I delivered.

However, after being delayed somewhat, winter has now shown up and demands attention. I have had to scrabble to the deepest depths of my drawers to pull out the thermals and have cranked my office heating up to what can only be described as tropical. 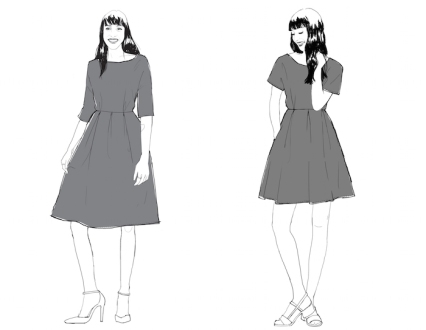 Both Variations of the Zeena really appeal to me, I love the shape and the relaxed fit, anything too tight makes me anxious and also limits the numbers of thermals vests you can wear underneath, now winter has made the effort to appear.

I chose the short sleeve bodice and cut the skirt pieces somewhere in between the mini and midi length.
I chose to use this Red fabric is bought during my fabric splurge in Toronto.
It is a quite loose weave, crepe- come viscose, with a slight stretch and is pretty slippery too which made it a bugger to cut. Once I came to finishing the dress, I knew a few of my pieces were on the wonk as pieces didn’t fit together so neatly. In future I will pin and weigh more furiously with this type of fabric

I managed to fit all the pieces onto 2 yards, apart from the pocket bags.
At first this made my mind boggle, as the cutting instructions showed that this shouldn’t be a struggle for two yards (I did lengthen my skirt, I know) but actually it shows that from the 2 yards I bought, how much the fabric had shrunk after a wash.
For the pocket bags, I just picked some cotton scraps out of my stash- I didn’t have any options that were similar weight and feel to the main fabric so in the end I just used some slightly barmy quilting cotton left over from a friends birthday present and hope with a few washes it will soften up. 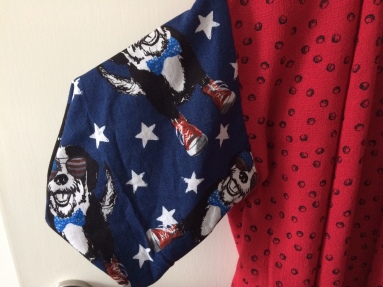 The construction was really easy and this is certainly a dress you could knock up in a day.
The instructions are clear and I only went wrong once, but fair significantly- it turns out I have done the pleats on my skirt backwards- I am blaming this partially on the ‘Making a Murderer’ binge watching going on simultaneously and partly on my usually twatishness.
It was only after leaving the dress hanging to settle, that I noticed the pleats didn’t match the digram and that the pockets also poke out a little. I tried the dress on and decided that the drape of the fabric, means I can get away with it.
Also if I had decided to correct the pleats, it would have involved unpicking overlocked seams which would have led to lots of thread fluff and a need to hoover, all of which were unappealing to me as I came to terms which these newly announced arctic conditions and still had a few episode of ‘Making a Murderer’ to watch.

As mentioned the fabric was a bit tricksy and overall my dress isn’t as sharp as I hoped, due to slippage when sewing.
I put my zip in, but it is far from my finest work, I have been out of the sewing game a little while and need to re-conquer invisible zips. When you look at the back of the dress you can see that the waistline doesn’t match up over my zip. I re-pinned this several times and this is where I think one of the back bodice pieces went astray whilst cutting and is slightly shorter, causing the bumpy zip.

I knew the fit of this dress would be a bit slouchy and the fabric is a bit drapey, so with that I mind I wasn’t too particular in going back and trying to fix these problems, with a stiffer fabric and more structured design, I’d be waving my seam ripper all over the place, but I wanted this to be easy to make and easy to wear.

As mentioned above ,I finished all my seams with my overlocker. I love being able to finish seams properly and with the loose weave of the fabric, I was happy that this would stop any potential fraying.
Being quite new to overlockers, I have had a few instances of blind frustration when the threads wouldn’t knit and my inexperience meant I had to watch some youtube videos, fumble about, curse a bit and just hope to find the sweet spot, without a real understanding of how it works. Currently my overlocker is behaving, but because of previous incidents, I didn’t want to upset it by changing thread colour, so left in my mid grey thread, resulting in neat, but not aesthetically pleasing innards to this dress. 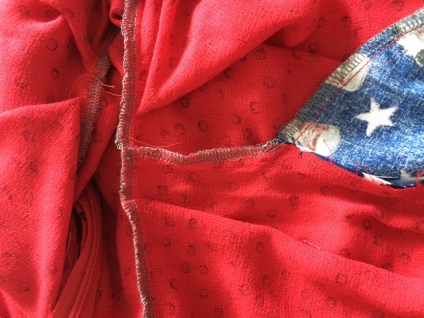 The loose weave means this dress is  little see through and a lining wouldn’t have gone amiss, but heck, I own a slip and will goddamn wear it. A few sidebar questions, whilst we’re here…
1. At what age does a slip enter the consciousness of women? I will admit I am just shy of 30 and will admit this is my first slip. Naturally my underwear collection has gravitated away from neon sets in man-made fabrics, towards a black underwear tool box equipped with gadgets for every occasion.
2. Is goddamn a swear word? My only new years resolution this year was to stop swearing. This has now been downgraded to swearing less. In my effort to cut down on cussing I was reminded of being younger and what words my parents let pass and which weren’t allowed. ‘Crap’ was allowed, ‘Goddamn’ would probably pass, ‘Shit’ and ‘Fuck’ were no-nos and ‘bloody’ and ‘bitch’ were just on the borderline, depending on context. 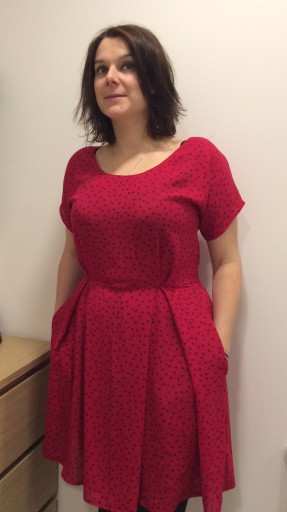 This is definitely one of my less polished makes, but I will be certainly be reaching for the Zeena pattern again. The dress is probably a failure, but I would count the pattern as a hit.
Most of my mistakes came from working with a fabric I wasn’t used to, but now I have learnt and get ready to enter my next sewing misadventure.
The By Hand London Girls have created another extremely versatile and wearable dress. I would say this is a great beginners pattern if you aren’t so confident, but would love a casual dress. I have a fabric already set aside for a long sleeved midi version, so watch this space, for a neat zip, correct pleats, swear word free version.