It’s been a while hasn’t it?
I really thought I was gonna sew and blog a lot more this year but alas it’s nearly May and this is only post no #3…you’ll just have to take what you can get I’m afraid. But I hope to make up for quantity with mega quality because this one is a cracker pals.

This make has been a total joy and something I have really taken time over. I had the Jean Paul boiler suit from Ready to Sew in my queue since it was released and not only is it one of my #makenine2019, it’s also good for #sewtogetherforthesummer too as they are focusing on jumpsuits this year …so Yes Boss, top make!

I knew I wanted a version pretty much the same as the denim sample from the pictures (even plan to copy with my white chuck taylors too!). I have a RTW denim jumpsuit that gets tones of wear, but is really a spring/summer number. I thought if I made this in a nice sturdy denim the Jean-Paul could be a year round mega hit.

Another reason I love this pattern is that it remind we of the overalls the T-Birds wear in Grease when they’re fixing up their Pussy Wagon. I LOVE GREASE. There is certainly going to be some pretty slick choreography going on in this bad boy.

…Also did you know that John Travolta STOLE the song ‘Grease Lighting’ from Jeff Conway. Jeff had played Danny in the stage version before the film and when he was offered the role of Kenickie, took it because he still got a big musical number. Then bloody Travolta comes along and steals it. Dick move Danny Zuko.

Anyways, I got my denim from Sew Over It in Islington- I live really near the store but this was my first time visiting. It’s a nice weighty denim with a tiny bit of stretch in a deep indigo wash. The team were really helpful and I ended up getting some olive crepe for an imminent Papercut patterns Meriden dress too.

There are quite a lot of pattern pieces, so I decided to treat myself and get this printed at the copy shop. I opted for the long sleeve version. 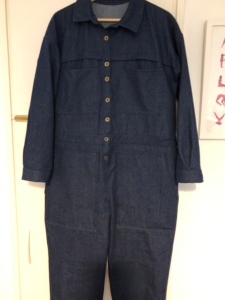 The instructions are clear and I didn’t have to refer to the sew along at all, but was happy to know it was there as a back up. I love the extra detail from topstitching the seams down. I used matching thread but it’d be a lovely touch in a contrasting thread. The denim was such a pleasure to sew and really behaved in the machine and to pressing.

The insides are all neatly finished with the combination of concealed seams and overlocked and topstitched seams. A real looker all round. 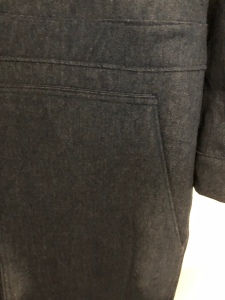 I got my buttons from Textile Garden. I wanted to keep things industrial looking so chose these plain brass ones. I had a bit of an issue with my button holes so they aren’t perfect but I certainly live with them.

I made a couple of fitting adjustments, but overall wanted to keep it loose with an androgynous feel. I removed 3cm length from the bodice, to be honest I could have done with a little more but I don’t mind the slightly dropped waist and 2 cm from the hem of the leg and wear with a turn up.

Here she is, and like Danny and Sandy I think this is more than a summer romance.