Sorry it’s been so long, but I’m delighted I’ve been able to catch you before festive mayhem ensues.
Yesterday we put up the tree at FOB HQ, so it’s hard for this post not to be draped in a little tinsel.
Here’s our masterpiece…slightly too big to fit in the space, but big enough to fit on our C3PO,  pink poodle, can of diet coke and Tutankhamen amongst other ornaments. 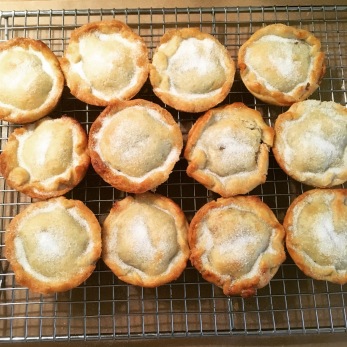 So somewhere along the way whilst listening to Christmas Fm, I managed to sew up a lovely Kochi Kimono from Papercut Patterns.

I have been desperately into velvet this autumn and rather unintentionally I have curated a collection of outfits that make me look like a victorian child in her christmas party dress. Wanting to be released from the Secret Garden, but still keen to come out wearing velvet, I wanted a simple, modern silhouette and thought the Kochi could deliver.

For the fabric I chose this olive stretch velvet- I decided on stretch velvet instead of cotton velvet as I wanted some drape as opposed to a stiffer structured one. In terms of fabric recommendation, the pattern says ‘anything goes’ as long as it’s woven. In usual circumstances I’d probably make some fit adjustments using a knit fabric for a woven pattern, but as the cut was so relaxed I didn’t worry here.
I was slightly trepidatious, even through my current velvet obsession, I could see how a stretch velvet wasn’t a million miles from Juicy Couture territory…but if it’s good enough for Britney, I guess it’s good enough for me…

Cutting my pattern pieces was a little tricky, as the combination of the slippy velvet nap, plus the slinkiness of the knit meant the pattern pieces did wriggle around a little; even when using my rotary cutter and as many  pattern weights as I could find…in retrospect I could have interfaced more pieces and seams as well, to help with accuracy, but I think the fluidity of this make is pretty forgiving.

I followed all the usual tips for sewing with velvet and triple checked the nap was going the same way on all my pattern pieces. On my main machine I used a walking foot and my overlocker had a great but fuzzy time chomping through this fabric.

The instructions from Papercut are clear but quite brief, they certainly assume some prior sewing knowledge, but in saying that this pattern is beautifully drafted with only a few pieces and it comes together quickly. The pattern gives you three variations and I can see myself wanting to whip up a few more, especially the lined version, for something more formal or in cotton lawn for a cool summer cover up.

I did come across a few problems. I decided not to interface the pocket pieces, fearing they would always sit a little stiffly on the drapey fabric, however without the stabiliser, it was a nightmare to attach the pockets cleanly and neatly. I would have kept persevering, as I goddamn love pockets, but in unpicking the stitches, I had bruised the velvet and I wanted to minimise this, so in the end chose to omit them.

Also I became quite confused with with ties, I know variation 1 is designed this way  to give you several tying options, but in the end, I just attached the long ties for a wrap over closure and added a popper inside.

Lastly, when it came to the internal seam of the neckband, I used a different method as the one given in the instructions would have ended up quite bulky in my fabric choice- so I overlocked the raw edge instead and then stitched in the ditch from the right side to attach the neckband.

And here’s my kool Kochi…

I am quite smug with the end result and wore it to work the day after I finished it.
As I love it so, I wanted to grab some photos of my festive make in front of the Christmas tree…but my tree is in a nook in the corner of the room, so despite my best self timer techniques there are some avant-garde experiments with perspective, composition and of course facial expression. 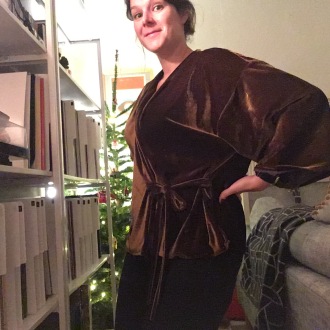 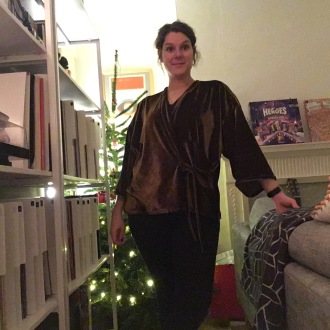 Hoping you find some gorgeous fabric, buttons and yarn under your tree and that you spend the festive period covered in glitter.