It’s been a while, but after nearly a year sitting on the subs bench, I’m happy to be back in the game.
I was tempted to wait until next week to publish and it would have been exactly a year since my last post, but I resisted injecting a false sense of ceremony and here I am. No parade this time guys.

Whilst I haven’t been blabbing on the web about it, I have still been sewing this past year and feel like I’ve settled into my style and how to sew the type of clothes that attract me in the shops.
The summertime always makes me want to sew armfuls of summer dresses for escapades and ice cream seeking missions.

When I saw the Collins top from In the Folds, I knew this could be a great staple for me. The trapeze shape is easy to throw on with skinny jeans, breezy enough for more humid days and plenty of space to hide Pizza babies.
I really like the other In the Folds patterns available, all of them showing some very clever drafting:

So for the Fabric- over the May bank holiday weekend there was a sale online at Stoff & Stil (actually there were loads of online fabric sales over this weekend but this was the star I hitched my wagon to).
I hadn’t used the site before but had seen lots of other sewers showing off their bounty on Instagram, so I thought I’d give it a try.
There was a lot I fancied, but whittled it down to two fabrics and ended up with some lovely drapey pistchio leopard print viscose that I think will become an Inari t-dress  in stylish summer sack style and then this dreamy seersucker.

Gingham is very visible in RTW at the moment but with some of the larger scale checks, I feel too table-cloth-esque- as per this creation of mine from the archives. 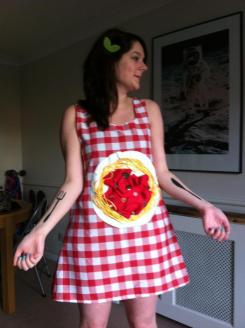 This seersucker has a dainty check and a lovely texture- it’s really very gorgeous and I’ll certainly be laying my hands on some more.

The pattern is a 32 page print party, but it is split up so you can print just the pieces for the version you are sewing.
I decided to go with the sleeveless option of view B. I cut a straight size E, lead by my bust measurement rather than grading or doing an FBA- this did lead to a lot of volume from the waist to hips, but I let that fly.
All in all the pattern comes together quickly and the panel detailing is a really nice touch.

I would put this slightly past a beginner level- when attaching the facing I had to have a few read throughs.
If I were to make this top again in a steady fabric, I would be tempted to omit the facing and finish the neck and arm holes with a bias binding, like on the hem. 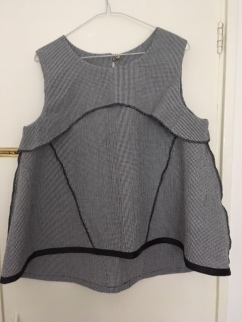 As you will see the innards are pretty neat and I am pretty smug about it. I used a silky bias to finish the hem, it’s a nice treat, perfect fuel for sewing smugness.

The only other thing I’d note is that the seam allowance changes frequently on this pattern – it is mentioned in the instructions, but when I’m in the sewing groove I can switch to autopilot and on a few occasions had to turn to my unpicker.

When I tried it on, my immediate thought was that’d I’d like a little more length in the front, so that it’s not such a drastic drop into the dipped back, but after wearing it, I really like the proportions.
Once I finished making this top I wore it out the very next day- a show of success for me, as sometimes hand made makes can sit in my wardrobe whilst I question my taste. 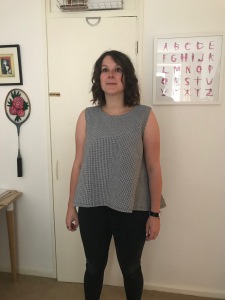 I think I’ll be making this pattern again, either in a white seersucker or with a schlubby white linen.
Apologies that over the last year I’ve still not learnt what to do with my face in photos- will include in my aims and objectives for the season ahead.

Glad to be back and see you again soon!

….hopefully after ice cream seeking mission has been accomplished.