Anyway despite the workload, I have managed to sneak in a few crafty projects on the side.
I am sure that we can all agree that there are some tasks in life that will never make it to the top of peoples priority list and in place of those tasks,  a spawn of small, pointless tasks will become acts of urgent antecedence. I find this phenomenon is particularly rife when I am at my busiest.

The tasks that get booted to the back of the queue for me can be split into two categories, those which I want to do, but owe fuller respect and attention and those which no one wants to do ever in their life span. 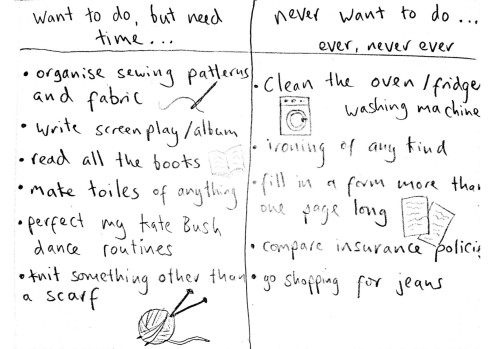 Then, when my to do list is at it’s longest, here are my tasks of procrastination…

…those and writing blog post of course! If you ever see with painted nails, you will know there’s something else I should be doing.

Here are a few tiny projects that I have been using to pass the time, when I really should have been doing something more important: 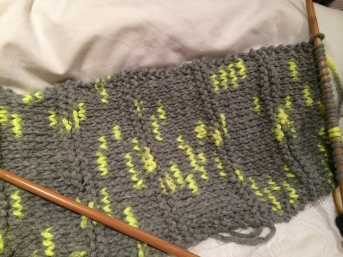 I have started knitting another scarf, because it’s winter, I have some train journeys to fill and because this scarf was not an urgent necessity.
I had bought this wool about a year ago, when me and every other indie wannabe were heavily into neon accents and it was displayed so temptingly in a crafty mag.
It’s a lovely wool to knit with and as such thought I’d whip up a scarf pretty sharpish.
I decided on a textured kind of pattern, with rows of plain scattered amongst chunks of perl.
I plan to add fringe at each end and can’t wait to learn, what I should be doing instead during the time it takes me, to cut each strand and loop into my scarf.
I have added an edge of plain knit in attempt to stop the scarf curling- in no surprise to myself or other knitters, this hasn’t worked, but I have stuck to my ‘not-so-solutional’ solution anyway.
What makes this scarf a champion in the procrastination game, is that my wardrobe is missing a big chunky scarf, that goes with everything and I chose to knit this nu-rave runaway project instead of a luxe shawl in charcoal or black. 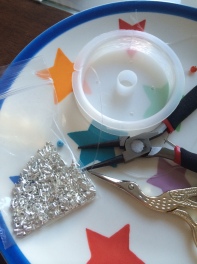 There was a dreary autumn afternoon, where I managed to sneak of to the Knitting and stitching show at Ally Pally.
To me this was some much needed ‘lone wolf time’. This is that wonderful time where you can mooch about and indulge yourself and everyone else can bugger off.
The show was really busy and it was really great to see a mixture of old and young there. It was actually probably much better I was on my own as it meant I could nip in through the crowds, avoids some forceful old lady elbows and bypass any stall that didn’t interest me.
The downside of going alone was that I couldn’t share my excitement when I saw some sewing blog ‘celebs’, such as Stuart Hillard, quilter extraordinaire, Lauren from Guthrie & Ghani and Lisa from Sew Over It.

As well as all the stalls, there was also a great exhibition space showing some amazing pieces from textile artists. Some of the work that stuck with 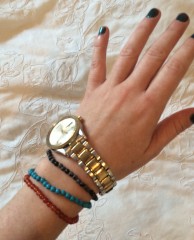 me was the course work from the Royal School of Needlework students. If I was offered I certainly wouldn’t turn down a place on their MA course,

I did give some sympathetic smirks to attendees who were clearly there as faithful companions- you are a very good person to be elbowed in the ribs by an old lady, whilst your girlfriend riffles through some mother of pearl buttons, I salute you.

Anyway, came away with some lovely fabric from the eternal maker, some glitzy gold bollywood style trims and also some semi precious beads from Bead spider, that I used to make a few dainty bracelets.
I must give an honourable mention to the Bead Spider assistant who server me- he made such intense eye contact I thought he was going to slip his number in with jewellery making supplies. 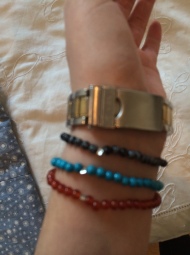 I wanted something more delicate that I could pair with my watch and other jewellery I have already.
I just strung the beads on clear beading elastic, with an additional silver crimp bead, at the end. I then knotted the elastic and slid the crimp over the knot and pressed flat.
The beads were very reasonably priced and I even have a few left- the remaining turquoise ones have been earmarked for some denim shirt embellishment a la Texan ranch queen.

THE COSTUME
In amongst all this, Halloween rolled around- which shows you how long it’s taken me to write this blog post as we are nearly into December and I should be adding the sequins to my snowflake costume. 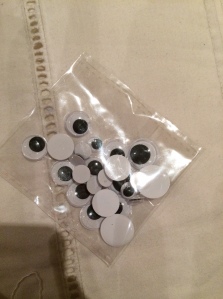 My lovely friend Natalie was throwing a Halloween party, so I wanted something good, especially due to history of strong costumes.
I felt I’d do a twist on a classic and go as a spider. I got a trusty multipack of black tights and started my work.
I always thought the traditional stuffed tights technique gave a lumpy look and I wanted something closer to the entomological truth.
To create articulated spider legs, I cut several lengths of cardboard and then looped them together with ribbon as a hinge.
I then inserted the cardboard pieces into the tights and added more ribbon round the joints. then connected these to a cardboard back plate and added straps like a back-pack. I used clear beading thread to suspend the legs from my wrists.

I only made two extra sets of legs as I counted my arms and my legs towards the arachnid total of 8.

When discussing with a colleague my costume plans and having seen similar on pinterest, I remarked,

“Wouldn’t it be good to stick googley eyes to my face so I have 8 eyes as well?”
But then very quickly redacted,
“but where will I get googley eyes in time?!” 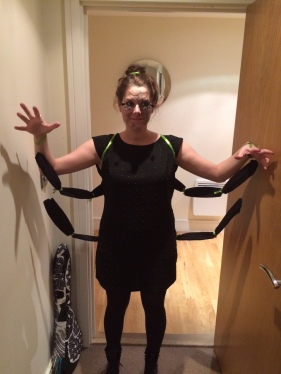 However as I secretly suspected, I had some in my crafty stash- BECAUSE THAT’S THE KIND OF WOMAN I AM, WITH GOOGLEY EYES READY  TO HAND.

My only criticism of the costume was that is didn’t turn out as good as the idea was in my head, but this is my criticism of nearly every costume I’ve ever made (other than the Italian spag bol dress, which is still one of my greatest achievements in life and its reception on social media nearly broke the internet, a la Kim Kardashian’s bum)

Anyway it’s nearly Christmas!! Do you have any festive makes underway?
If I discover the secret of how to get more hours in the day, I will hand-make each of you a quilt.