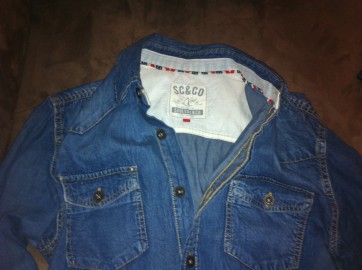 This one is an easy but hugely time consuming customisation for yourself or a space cowboy in your life. I’m going to be honest, I didn’t really think this one through, I just steam-rollered in with very little thought for the man hours.

Anyway, as I’m sure you know denim shirts are back in a big way and when you see every Tom, Dick and Harry (or Ross, Katie, Holly, Matt, Louise, Annie, member of One Direction) wearing one, it’d be nice to know that yours will stand out a little.

I bought a second hand denim shirt off eBay and immediately went about unpicking the yoke piece from the lining piece on the back of the shirt. I had a grand plan to add some embroidered text across the back between the shoulders.

In my mind’s eye I could see a really neat looking customisation, I would embroider the onto the yoke piece and then reassemble the shirt, so from the inside it’d be all neat.
However if I had know the total time I’d put into finishing this godforsaken project at 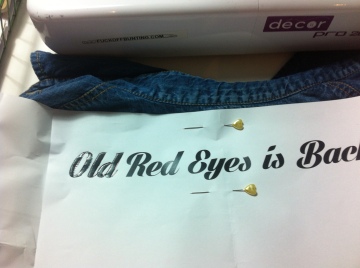 the beginning, I might have not bothered the deconstruct and sewn straight through the yoke and lining. But alas I didn’t know and the end result is pretty darn neat, so yeah, I’m pleased but explain that to all my other ‘Works in Progress’ that have been sidelined for this knob of a project.

My first task was to get the text onto the shirt as a guide for my embroidery.
I had chosen the title of a Beautiful South song ‘Old Red Eyes is Back’. In my skewed crafting scheming, I thought that I would finish this project in time, to force my Boyfriend wear it, like a homemade fan boy to the Paul Heaton & Jacqui Abbott gig we went to. This did not happen, take note of the past tense, “gig we WENT to”…a long time ago.

Anyway… I printed the text in the font I wanted and sized according to the shirt. After a few successful projects using carbon paper to trace off sewing patterns, I thought this would be the way forward.
I placed the carbon paper face down on the shirt, then t 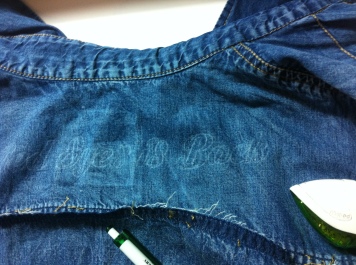 he printed text on top of that and secured.
I used a ball point pen to trace off my design with a firm hand and mind boggling precision and… it was totally underwhelming. Maybe I should have used the yellow carbon paper not white, but it was too late now.
As my next step, I went over my design with a white tailors chalk pencil and that didn’t make the design as clear as I wanted it either.Dammit.
In the end I used my silver sharpie to go over the outline, although not a traditional method this worked really well in the end and I would add sharpies to the category or tools “I should have just used in the first place” like duct tape and staples.
Doing all of the embroidery by hand meant I was handling the fabric a lot and any chalk or carbon markings probably would have needed to be topped up as I worked anyway, so in this very particular circumstance the extreme permanence of a sharpie worked for me.

The silver sharpie not only stood out against the denim, it not only stayed put despite my grubby little paws, it also gave a slightly stiff outline due to the metallic ink, that in the end helped me not to bruise the denim as much as I might have by manhandling it. The only draw back is that the sharpie did leak through and there are a few dots on the lining- but this project took me about 27896 hours of manpower, so bloody deal with it.

I should have stuck some light interfacing in to stitch my design into, but by now it must be clear thatI didn’t think this project through and even at the best of times (all the time), I avoid interfacing when I think I can get away with it (which is all the time in my head but very rarely in reality, I will NEVER learn).

I wanted a dense embroidered fill for the lettering so decided to use single strands of standard cotton thread and to commit myself to the marathon of embroidery that was to come. 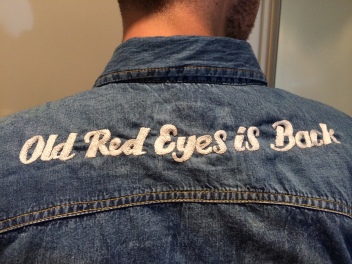 Once I had finished the lettering I had to reattached the yoke piece the the lining. I did this using a slightly thinker silky thread to get as close the orange denim stitching as I could. I could have spent more time trying to match the thread to orangey tone already used, but this project had already been such a time vortex I didn’t have the energy, the colour match is pretty good, I’m happy enough. TO match the denim stitching I also set my stitch length to 3.5 to replicate the chunkier stitches.

This is it finished. It took bloody ages. I have emotionally blackmailed the recipient into wearing it, if only for the time it took for this photo to be taken. Mission complete. I hope you like it Paul Heaton, I’d offer to make you one, but not anytime in the near future as I have plans. Sorry.

Now one last note… you better start spreading the news, because I’m leaving today, on a summer trip to New York!
I have already starred Mood fabric shop on the google map and am certain I’ll see Tim Gunn there and together we can ‘Make it work!’
Look out for NY sewing brags and finds when I’m home.

2 thoughts on “Some people call me the space cowboy, some people have stopped calling as I’m still doing this goddam project.”