1. When I used to bake, this usually meant reading the instructions whilst a stronger person, (flat mate or boyfriend) did the mixing and me stepping in when they were doing it wrong, exuding some kind of baking superiority  because I have been doing it since I was a child and this superiority is expected of ladies (this is sexist I know and I am hugely against gender stereotypes but sometimes you need an excuse to get on a high horse).
Now times are changing as my boyfriend has taken an interest in baking and is soon to bypass me in the race for the baking crown. He has realised he can read the cook book himself as opposed to having me mumbling the instructions through a mouthful of glacé cherries. He has made a number of delicious creations and my role has evolved into more of a ‘cake consultant’ rather than hands on ‘pie project manager’.

2. By association to said boyfriend, I now have access to a Kitchen Aid. It is both beautiful and powerful and does its job excellently- a like to think of it as the Boudicca of the kitchen.
It’s not until you use one you really get how absolutely flipping brilliant they are. I’d always lusted after them, in their candy shades, as they lingered in the back ground of Masterchef, Great British Bake Off and Saturday Kitchen.
Hand mixing is obsolete now, I am planing a mass bonfire of all the wooden spoons.

The festive period is usually one of increased baking activity, but this year I’ve only attempted one treat- cake pops.

Who would have expected me to give in and try and make these little bitesize delights, with their colourful designs, propped casually in a kilner jar tipped off with a vintage ribbon?!
Oh wait, I write a craft blog and play ukulele and go to anything as long as it’s pop up and love earl grey tea and quinoa- what a bloody huge surprise. I gave in and got on the bandwagon.

However there is only one event that would drive me to this- Katie Lamborn’s Tiny Christmas Food Party. This one of my favourite events of the festive calendar, where as hinted at in the title, we only eat the tiny festive canapés from M&S and wear Christmas jumpers and drink Bucks Fizz.

I read a number of online tutorials about cakes pops- some are just tiny spherical cakes baked in a special mould, some are a cookie dough-brownie hybrid but the majority of people made theirs from a smushed cake cement made from cake and icing. 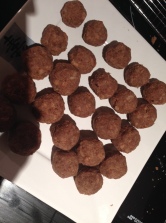 For my base cake I used a very old chocolate cake recipe that I have committed to memory from my youth. I thought if I was just gonna mush it up then there was no need for anything too glamourous

Cream the butter and sugar, add the eggs and then fold in the flour and coco.
Add the milk by eye, just as much as you think you need to loosen it up a little.  Bake for approx 35mins at 200c.

Once the cake has cooled smush it all up. To make your mouldable dough, mix in some buttercream, again this is a ‘by eye’ task, til it looks like it’ll all stick together. The roll into ping pong sized balls. As you will see at this stage they resemble an Ikea swedish meatball.

To make cake a cake pop you need sticks, I got mine from my personal sponsor, eBay.
Melt some chocolate, dip your stick in the chocolate and then push the sticks into your balls.
Pop the whole lot into the fridge for about an hour.

Once set, melt some more chocolate and dip the balls in, then plonk into some sprinkles for good measure.

To let the chocolate harden you need some kind of presentation vessel- other bloggers recommended florists oasis or polystyrene (if you can handle the spine chilling squeak).
I used an upturned box with holes poked in it, so the pops could dry upright.  I later covered this in wrapping paper for a kind of presentation plinth.

There you go- easy business.

Now back to my cake pop gripes.
-By mixing cake with icing, then covering it in chocolate and sprinkles, what you end up with is a very very sweet treat not to mention you’ve condensed it by rolling it in a ball they can be very dense and heavy.

– the end texture is a little strange, a bit grainy, a bit stodgy, kind of a brownie gone wrong. I have to admit I have never bought a cake pop so didn’t really have anything to compare it to.

– from the cake pop pictures I had seen on the web, they all looked beautiful in all their colour coordinated glory. My pops however looked like they had been in a fight, or on a particularly booze bender. In retrospect I would either apply the sprinkles by hand, or wait until the chocolate has become slightly tacky. 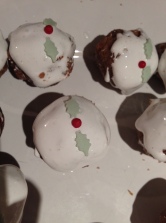 – maybe it is a trial and error process. The master baker boyfriend also made some the following day, but his had a lighter base cake and a glossy coating made from Marshmallow Fluff and he had the same reservations. In the end both batches were eaten and people said they were tasty.

I’m not sure if I’d make cake pops again or if I were I might just make the teeniest of cupcakes and shove it on a stick.