Jeans, so key to everything, yet so very annoying.

I personally hate going shopping for jeans, so when I get a pair I like they are in for the long run.

Here’s a quick post just to show how I go about mending jeans- a lot of people think a rip is the end for their faithful friends, but I just won’t accept it.

This example is shown on a rip across the bum next to the pocket- but I have used the same technique at the crotch and next to belt loops.

First hand sew the rip closed, this will just make it easer to work with and adds another layer of support.  I have used a gentle whip stitch- just to bring the rip together as opposed to sealing it shut.

Then pin a piece of fabric over the rip, here I used a cotton canvas, but have previously used silk (extra strong no bulk) and jersey (gives movement).

Then go to town, I mean really stitch the heck out if it.
I have used zig zag stitch all over the fabric patch. I think this just bolsters it can means you have covered more ground then you would with a straight stitch.

Although it looks a little messy now, once you have washed it a few times, the stitching starts to blend with the denim, plus you can match your thread much better than I did as well!

So don’t fret, if you have the powerful, denim ripping thighs or bum like I do, your jeans can be saved.

If you aren’t blessed enough to have a sewing machine, this is a repair service I have provided to friends for a) a toffee crisp from the vending machine b) a high end magazine printed on that lovely matte paper. 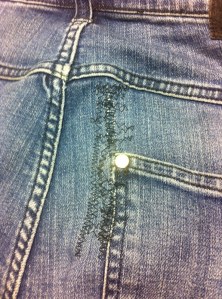 One thought on “Money Muscle.”